Archaeological Museum of Canavese- Cuorgnè (TO)

You are here: Home1 / Archaeological Museum of Canavese- Cuorgnè (TO)

Opened in 2004 at the 19th century textile factory, the Archaeological Museum of Cuorgnè (TO) houses, divided into 9 rooms, the archaeological remains that document the history of the surrounding area, from the Final Palaeolithic to the Middle Age. The Canavese area is, in fact, able to offer numerous testimonies about the last millennia of the Palaeolithic (starting from about 14000 years ago) and the Neolithic (VI-III millennium B.C.).

The first three rooms are dedicated to these two phases, hosting the findings of the caves of the Boira Fusca (bear remains, flint objects and rock crystal dating back to the V millennium B.C.), Neolithic ceramics) and the Neolithic villages of Montalto, Santa Maria di Pont and San Martino, among which you can admire a glass found intact in a Montaltese tomb and the blade of a flint dagger from San Martino.

The route continues with the Age of Metals (III-I millennium B.C.), in rooms 4, 5 and 6, where finds from the monumental tombs of Tina di Vestignè are on display, including two large funerary stelae. The Romanization of the territory is instead testified, in rooms 7 and 8, by the finds coming from the Valperga site, among which a rich epigraphic collection. The last room houses the remains of the early medieval castrum of Belmonte, as well as the pictorial cycle frescoed by Giacomino di Ivrea (15th century), coming from the castle of Villa Castelnuovo. 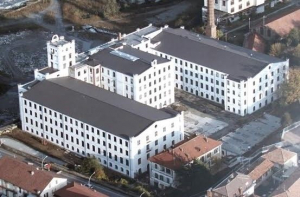 The Textile Factory, home of the museum

The Archaeological Museum of Canavese (via Ivrea 100, Cuorgnè- TO; coordinates Lat. 45°23’33.07 “N, Long. 7°39’10.55 “E) is open for visits from Monday to Friday (for groups, Saturdays and holidays by appointment), from 9 am to 5 pm. For updated information, visit:http://cesmaonline.org/museo-archeologico-del-canavese/