Archaeological areas of Susa (TO)

You are here: Home1 / Archaeological areas of Susa (TO) 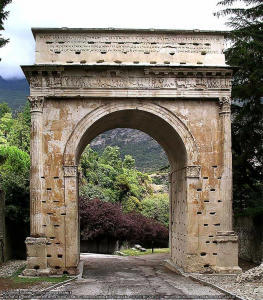 Susa: the arch of Augusts

Like a crossroads of several itineraries, the municipality of Susa is home to two archaeological areas, located to the west and south of the town, which include remains ranging from the time of the Romanization of the territory (late 1st century BC), when the city of Segusium was founded, to the 11th century.

In the first of the two sites, located in Via degli Archi, you can still observe the arch of Augustus (dedicated to the emperor in 9/8 BC), part of the aqueduct, of the late ancient wall (4th-5th century AD), the remains of the palace of the governor of the province of the Cozie Alps (the Praetorium), in addition to the medieval castle (11th century). The excavations of the Praetorium have returned a part dating back to the 1st century AD, while the latrine and a cistern date back to the late ancient age. The complex is connected to the late Roman fortifications and the aqueduct. With regard to the castle, its construction started in the 11th century, but has renovations that go up to the 18th century.

As for the southernmost area, located between the St. Francis road and the Consolata one, it houses the Roman amphitheatre, dating back to the 2nd century AD: the perimeter wall of the arena, which was modest in size (60×53 m), the carceres (the entrances for gladiators) and the vaulted perimeter corridor that runs under the bleachers, are preserved.