The 35000 rock engravings of Monte Bego, in Val Roia 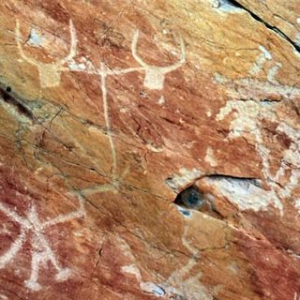 Corniform engravings, which testify to the existence of a “cult of the bull”

The about 35000 rock engravings, 50000 if we also count those of the historical period of Monte Bego, in Val Roia, are distributed over an area of about 14 km2, on the Italian-French border, between 2000 and 2500-2600 m of altitude: they date back to the Neolithic period (about 5500-2900 B.C.) and to the protohistoric phase (3000-1600 B.C.); then there are those of the historical period, which go from the Roman period to the contemporary age. They concern the sectors of the Valle delle Meraviglie (which owes its name to their presence), Fontanalba, Valuaretta, Valmasca, Colle del Sabbione and Vej del Bouc (lake in the Entracque area). These engravings have been grouped according to some typologies: among the most ancient we find rings and geometric figures, while at the Copper Age (3000-2200 B.C.) and Bronze Age (2200-1600) they are characterized by the presence of weapons (daggers, halberds), tools such as the plough, anthropomorphic images and corniform;

The latter testify the existence of a “cult of the bull”, with numerous images of heads of this bovid engraved.

Together with those of Valcamonica, in Lombardy, the rock engravings of Mount Bego constitute the pole of Alpine rock art, as well as being one of the most important sites for the protohistoric phase in Europe. 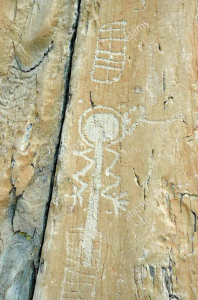 The man with zig-zag arms

As this is a high altitude site, the rock engravings of Mount Bego (coordinates Lat. 44° 4’20.32 “N, Long. 7°27’1.96 “E) are visible only in the summer season, following the mountain guides on the hiking trails. Casts of some engravings can also be found at the Museo delle Meraviglie, at the nearby Tende (for further information, see the detailed sheet).