You are here: Home1 / Archaeological area of Industria 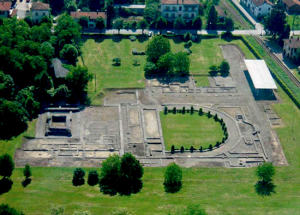 Aerial view of the site, with the sacred area in the foreground

The archaeological area, which is found in the municipality of Monteu da Po (TO), preserves the remains of the Roman colony of Industria, whose importance was mainly due to trade. Located on the bank of the Po – which today flows a few kilometers further north – it was in fact an important stopover for goods coming both from the Aosta Valley (where metals such as iron and copper were extracted), and from the Adriatic.

The colony was founded in the imperial age, between the 1st century BC and 1st AD, on the remains of the Ligurian settlement of Bodincomagus (whose name means “market on the Po”), mentioned by Pliny the Elder. Of the ancient Roman settlement, some residential neighborhoods are visible today and the remains of the sacred area dedicated to the cult of Isis and Serapis, of which the temple podium and the exhedra surrounding the open space connected to the religious building have emerged. It is a cult of Egyptian origin, therefore imported, and this is a characteristic of settlements with a commercial vocation (the most famous temple of Isis “Italian” is that of Pompeii).

Many bronze finds have also been found (figurines, ex-voto, objects of common use), preserved at the museum of antiquities in Turin: the circulation of copper, which together with the pond composes this alloy, favors the development of this type of processing. 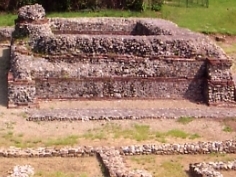 Industria: part of the remains of the sacred area