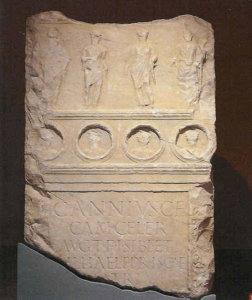 The epigraph of Caius Annius Celer, priest at Augusta Bagiennorum

Located in the premises of the town hall, the historical archaeological museum, named after Giuseppe Gabetti, a Germanist from Dogliani who lived between the nineteenth and twentieth century’s, gives visitors the chance to learn about the history of the population of the Dogliani area: in fact, it was established on the occasion of the discovery, during the 70s, of a small Roman necropolis of the first century AD in the hamlet of San Quirico, and since then it has been enriched with finds from the area.

The museum as it is visible today is the result of a reorganisation carried out by the Superintendence in 2006, which shows the sequences of the population of the territory, starting from the Neolithic period (6000-3500 B.C.): the first of the four rooms, in fact, presents, in addition to a series of fossils that testify to the geological evolution of the land, finds dating back to the Neolithic period – such as axes in polished green stone, clearly influenced by the Middle and Late Bronze Age (1530-1200 B.C.). The bronze finned axes found in Monchiero, a town a few km north of Dogliani- and the Iron Age (900-100 B.C.) date back to this period, among which the sandstone head  that had been inserted in the city walls.

In the following rooms there are materials that testify the Romanization of the territory (1st century B.C.- 1st century A.D.), when the area became part of the territory of Augusta Bagiennorum (click here to read mode): besides the finds coming from the necropolis of Carrù, there is the epigraph of Caius Annius Celer a priest assigned to the imperial cult in the Roman colony, found in the locality of San Quirico. 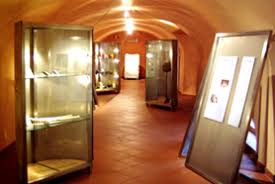 One of museum’s rooms