The Camillo Leone Museum in Vercelli

You are here: Home1 / The Camillo Leone Museum in Vercelli 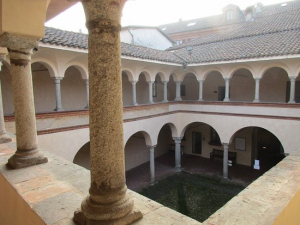 The interior colonnade of Casa Alciati

The Leone Museum is housed in two distinct buildings – the sixteenth-century Casa Alciati and the baroque Palazzo Langosco, linked by a connecting sleeve. It collects testimonies of the history of the Vercelli territory, starting from the Neolithic period (6th-3rd millennium BC).

As for the archaeological section, exhibited in 13 rooms of Casa Alciati, dating back to the Iron Age there is a series of vases from the Magna Graecia area (5th-3rd century BC), with vegetable decorations, on a black background or with red figures. The bilingual epigraph of Acisio Argantocomatereco testifies instead to the phase of transition between the Celtic and Roman ages (1st century BC): the inscription consists of eight lines in Latin and four in Leponzio (Gallic language), and certifies the donation of land by a private individual (Acisio Argantocomatereco), probably a local magistrate

The Roman section includes above all finds dating back to the 1st-2nd century AD, carried out during the nineteenth-century excavations in Vercelli: you can admire sarcophagi, epigraphs, amphorae and bronzes. This section ends with medieval finds, including fragments of the mosaic floor of the church of Santa Maria Maggiore (11th century) and a series of sculptures from Vercelli’s cathedral.

In the rooms of Palazzo Langosco there are on display weapons, Venetian glass, majolica and porcelain, which can be placed between the late Middle Ages and the beginning of the Modern Age (15th-16th centuries), as well as precious objects belonging to Giacomo Guala Beccaria, cardinal of Vercelli origin. 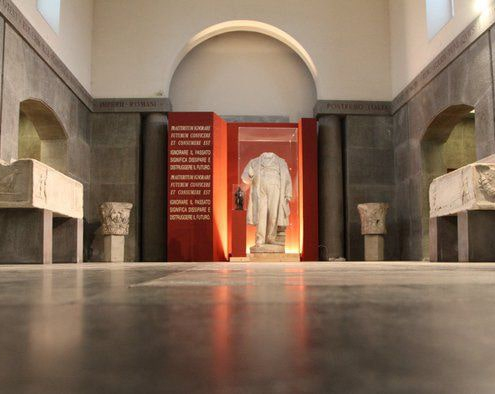 One of the rooms of the Roman section

Located in the complex consisting of Casa Alciati and Palazzo Langosco (via Giuseppe Verdi 30, Vercelli; coordinates Lat. 45°19’35.49″N, Long. 8°25’21.07″E), the museum is open for visits from Tuesday to Friday, from 3 pm to 5:30 pm (and, by reservation, in the morning), on Saturdays and Sundays, from 10 am to 12 pm and from 3 pm to 6 pm. Entrance is free every first Sunday of the month. For up-to-date information, please visit the website: http://www.museoleone.it/