You are here: Home1 / Archaeological area of Libarna

Located on the left bank of the Scrivia, the archaeological area houses part of the ancient Roman city of Libarna, which stood along the Via Postumia (which coincides with the thistle maximum of the city), one of the arteries of Roman communication, which connected Aquileia to Genoa: the origin of the settlement is coeval to the tracing of the way, in 148 BC, even if we can probably speak of a process of urbanization only from 89 BC, year in which the Latin citizenship is granted to the population.
The remains of the Roman city are preserved of two of the four “urbiche gates”- the northern one and the southern one- of the theatre 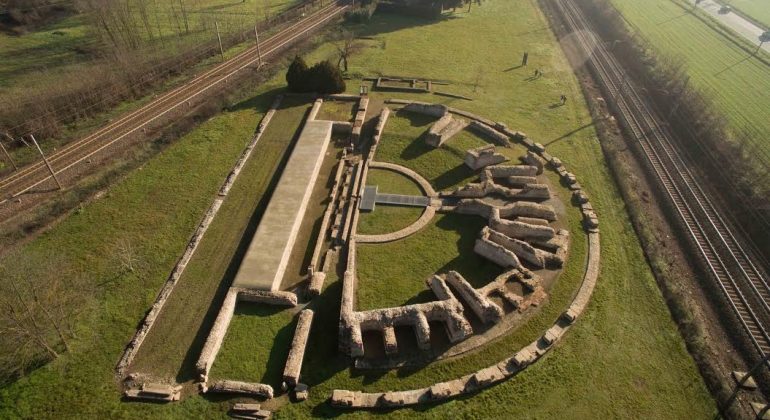 1The theatre of the 1st century A.D.

and of the amphitheatre, placed respectively in the North-East and East areas of the settlement, both going back to the first century AD; the baths, which stood between the two structures, but were never investigated in a systematic way. The last remains are those of two insulae located south of the baths: in the first, you can still admire the remains of an aristocratic residence, of which was part of the mosaic floor that depicts the myth of Licurgo and Ambrosia; the domus was then resized at the end of the first century AD, to make room for a workshop and a fullonica, in which they were painted the clothes; same fate knew the second island, which initially housed another domus (the reorganization of the area is perhaps to be linked to the erection of the amphitheater). The tracing, towards the end of the first century BC, of the Via Iulia Augusta (from Rome to Arles) and the consequent displacement of the traffics, caused a decline of the settlement.

IN DEPTH AND VISITS

The archaeological site (via Arquata 63, Serravalle Scrivia-AL; coordinates Lat. 44=42’21.11″N; Long. 8=52’4.29″E) is accessible for visits from Tuesday to Saturday, in addition to the first and third Sunday of the month, from 9:00 to 15:45, with mandatory reservations for guided tours, groups and schools. For updated information, the website is available:

Cliick here for the map